Home The City of Surrey BC

The City of Surrey BC

With a population of half a million, it’s also one of the fastest growing cities in Canada.

Christmas-themed haunts are happening in Surrey this month with live actors, animatronics and more. The Creepy Xmas experiences are held at Cougar Creek’s House of Horrors. The venue is located at 12530 72nd Avenue. In 2022 the haunted experiences run from 6:00 to 9:00 pm on December 16-18 and December 21-23.

For more information about the attraction check out our article about Cougar Creek’s House of Horrors.

In this article you’ll find information about the following topics:

Surrey has one of the most ethnically diverse populations anywhere, with over 40% of residents speaking a first language other than English.

Surrey is a fast-growing and increasingly dynamic place to do business, but not a major tourist destination (although we think it could be as it’s home to some wonderful places and events).

Surrey has a number of large shopping malls including Guildford Town Centre (with over 200 stores at 10355 152nd Street) and Central City (with over 130 stores as well as an SFU Campus at 10153 King George Boulevard).

Some of the most interesting places to visit in the city include the following.

Other Attractions and Places of Interest

Surrey hosts a number of great festivals and events, including some of the Lower Mainland’s largest and most impressive festivals. Below is a list of some of the best.

Other Surrey Festivals and Events

Surrey in the Summer

As far as regular weekly events, the Surrey Urban Farmers Market takes place on Saturdays from early June until early October. It’s a medium-sized market with live music in the afternoons.

Surrey is home to some amazing places to eat. From Indian to Western, Asian and everything in between.

Surrey has a number of hotels. On of the most well-known is the Sheraton Vancouver Hotel. It’s where a lot of conferences take place. To learn about this and other places to stay see our article about Surrey Hotels.

The City of Surrey is on the traditional unceded territories of the Katzie, Kwantlen and Semiahmoo Nations. 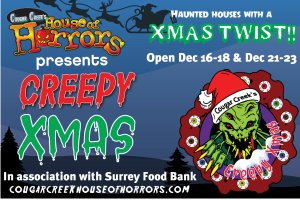