Lonsdale Quay is where you’ll find the SeaBus terminal and Lonsdale Quay Market. Close by are the Shipyards, Waterfront Park and many restaurants.

The Lonsdale Quay Public Market never closed during the peak of the COVID-19 pandemic in the spring of 2020. Many of its non-essential-services and non-food-related vendors suspended operations temporarily. Over a dozen places, however, never closed.

As of May 20th, 2020, the 2nd floor retail level of the market has reopened (after having been closed for a number of weeks). Not all shops have resumed operations right away, but more and more are slowly opening their doors once again for business.

When you take the 15-minute SeaBus ride from Vancouver’s Waterfront Station over to the North Shore you land at Lonsdale Quay, home to the Lonsdale Quay Public Market and close to a variety of interesting places. The entire neighbourhood is known as Lower Lonsdale.

At first, North Vancouver‘s Lonsdale Quay might seem unimpressive if you arrive by water. As you exit the SeaBus terminal, straight in front of you is a giant concrete bus terminal, which is convenient if heading someplace else on the North Shore directly. Don’t be fooled by the uninspiring first impressions!

Walk over to your right as you exit the SeaBus terminal and you’ll find the main attraction – the Lonsdale Quay Public Market.

Walk further on around and you’ll come across Shipbuilders’ Square – home of North Vancouver’s amazing Shipyard Night Market in the summer – and a little further on you’ll find the Shipbuilder’s pier which is a nice place for a stroll.

Or, instead of turning right as you exit from the SeaBus, if you turn left past the McDonald’s, through the taxi and drop off parking and then down a small lane, you’ll come to Waterfront Park.  See below for more details on each.

Lonsdale Quay’s public market has been a North Shore attraction since Expo ’86 – Vancouver’s 1986 World’s Fair. Inside the market you’ll find an eclectic selection of stores selling everything from wine to candies, fish, art, fresh produce and flowers.

Outside the market in the summer there is often live entertainment. Also, if you climb up the stairs to the observation tower (the bright red one with the giant Q at the top), you’ll find a beautiful view of Vancouver in the distance.

Making a very interesting daily public market even more interesting is the Lonsdale Quay Farmers Market that takes place right outside the Quay on Saturdays from May until October from 10 am to 3 pm.

Although a tiny farmers market compared to other Metro Vancouver farmers markets, Saturdays in the summer are a great time to visit the Quay, and a good day to pick up farm fresh produce.

In the summer there is also usually live music, yoga (or some other kind of exercise class) and occasionally even a free outdoor movie outside in the plaza.

The Lunar New Year was celebrated at Lonsdale Quay with lion dancing and other cultural activities on Saturday, February 1st, 2020. The schedule of events for the day was the following:

Family Day takes place on the third Monday in February in British Columbia. On that day every year, including on February 17th in 2020, Lonsdale Quay celebrates with a day of family-friendly activities.

The schedule of activities for the event in 2020 is below. (Note: Times and other details were subject to change.)

In addition to the above, there was also live music featuring a variety of local musicians. Unless otherwise noted, activities were free. Donations to the BCSPCA, however, are greatly appreciated.

Lonsdale Quay celebrated St. Patrick’s Day in 2019 with a variety of free activities. Below was the schedule of events for the afternoon of Sunday March 17th last year (and 2020 will likely be similar):

Children’s craft activities, balloon twisting and face painting also took place between 11:00 am and 2:00 pm. Similar events take place at Lonsdale Quay at other times of the year too.

If you walk east of Lonsdale Quay for about 5 minutes you’ll come to Shipbuilders’ Square. It’s on the waterfront side of the big white Pinnacle Hotel at the bottom of Lonsdale Avenue, behind an old restored ship manufacturing building from bygone years.

Past Shipbuilders’ Square is a pier, which makes for a nice walk out into Burrard Inlet for a ways. There isn’t a lot else to see, except for Friday and Saturday evenings in the summer when the place really comes alive.

Fridays are when North Vancouver’s Shipyard Night Market takes place at Shipbuilders’ Square (between 5 pm and 10 pm from mid-May until late September), and Saturdays are when the Summer Sessions Concert Series takes place, with free live music in July and August from 5 to 10 pm.

Unlike at some of Metro Vancouver’s Night Markets (like the Richmond Night Market), you won’t find any inexpensive sunglasses, imported electronics or cheap clothing here.

The vendors at the Shipyards Night Market are typically local artisans selling everything from organic vegetables to gluten-free bread to handmade jewellery. To add to the atmosphere, a different local band performs each night.

Waterfront Park is a nice little park. It’s not outstanding, but still a nice enough place. It’s less than a 5-minute walk from the SeaBus terminal, but not easy to see at first.

Below are some tips and things to know to help you make the most out of your visit to Lonsdale Quay and the Lower Lonsdale Neighbourhood.

TIP #1: Consider going to the Lonsdale Quay Market on a Friday in the late afternoon so you can combine it with a visit to the night market at Shipbuilders Square in the summer.

TIP #2:  There is free parking on weekends and evenings at the ICBC parkade on tiny Rogers Avenue just off Esplanade. This can be handy if you plan to park for a while and catch the SeaBus over to downtown Vancouver.

If staying for less than 1 or 2 hours, if you park a couple of blocks or more away from the Quay you can also take advantage of North Vancouver’s free on-street parking (assuming you can find an empty spot).

TIP #3: Got little kids? Need a break from dragging them through the market? Then check out the free kids’ play area upstairs in the market building at Lonsdale Quay. It’s tiny (so your kids need to be tiny too), but the play area can keep the children happily entertained while you sit for a rest and/or read a book.

Lonsdale Quay and Shipbuilders’ Square are both wheelchair and stroller accessible. Lonsdale Avenue has some nice little shops to look at in the area too, plus a number of great restaurants, but it’s a steep hill for the first eight or so blocks (kind of like San Francisco) so not good for wheelchairs, except for those with powerful motors. 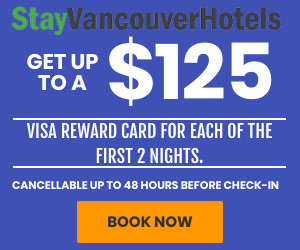 Information on this website is accurate to the best of our ability at the time of writing, but actual details may vary. Vancouver's Best Places does not accept responsibility for loss or inconvenience due to errors. For the most up-to-date information see relevant official websites.
We use cookies and other tracking technologies to improve your browsing experience on our website, to show you personalized content and targeted ads, to analyze our website traffic, and to understand where our visitors are coming from. By browsing our website, you consent to our use of cookies and other tracking technologies.Accept
Privacy & Cookies Policy
Necessary Always Enabled